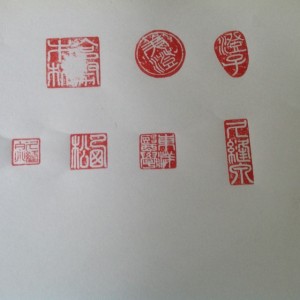 Seals are used in painting to complete a composition and give added meaning. The viewer’s eye is drawn to the bright red color which contrasts the rest of the painting. these small seals are visually powerful and giving to the painting an important balancing effect.
Chinese/Japanese seal is a seal or stamp containing Chinese characters used in East Asia to prove identity on documents, contracts, art, or similar items where authorship is considered important. Seals are typically made of stone, sometimes of wood.

The word 印specifically refers to the imprint created by the seal. The colloquial name chop, when referring this kind of seals, was adapted from a Malay word during the colonization of the Straits Settlements. East Asia currently uses a mixture of seals and hand signatures, and increasingly, electronic signatures. But notably in Japan and China, seals remain commonly used instead of a signatures when doing business or other procedures, and in certain cases, only seals are acceptable. 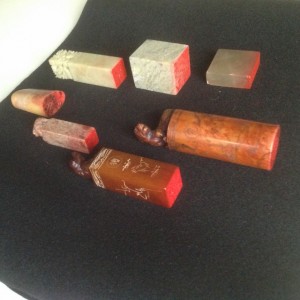 Sign and seal mark is not only a sign of author; itself is a work of art. Seal is the beauty of red and white, which stir up passion of calligraphers and painters, and pressed seal gives impression which shows to a one of the engraving work. Therefore it is considered stamp material by authors.

They are typically used with red ink or cinnabar paste. The red paste used for seal ink and impressing is made from finely pulverized cinnabar (mercuric sulphide), is mixed with a seed oil from Fukien Tea or caster oil, which has been exposed to the sun for three years, then added to the finely ground cinnabar. This is just one of many formulas. 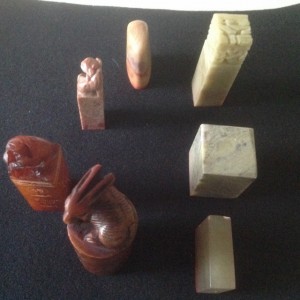 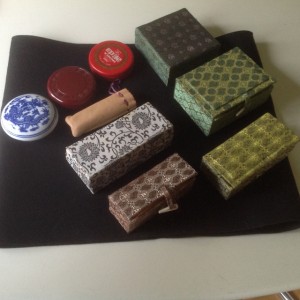 The Best material is from黄山 Huangshan in China.