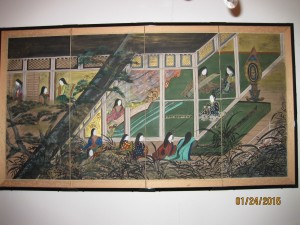 In Nihonga history, Japanese painting feature appeared about the time of the Heian period. Under the influence of the Tang Dynasty of Tang picture (Karae) in China, Yamato-e developed in Japanese culture, and it is said to be in the starting point. The Yamato-e showed and described about Japanese environment, life of people, stories and poetry, temples and shrines and Buddhist paintings, which had been supported widely from the Edo era to Meiji.

Yamato-e is a technique that will be drawn to show thing of distant at the same size. Kakejiku (hanging scroll) is long vertically because it extends far things steadily upward.

In Yamato-e classification there are three motive which is four seasons, picture of views of January to December, and the attractions of picture of the place which show on the sliding door picture and folding screen.

The picture scroll has been made since the late 10th century, which is constituted by the Yamato-e and the document. The picture scroll are drawn long screen and manner of viewing, while wound up and finished portions that viewed from rightto left which are specially in that unwinding portion to see now.

The folding screen and sliding door picture show decoratively with motives of birds and flowers, and is often drawn as the design of the type of form Doha. A hill is a relief of the ground drawn in gentle curves which is extremely simplified to enhance the decorative effect of the screen. Yamato-e technique shows not a realistic but decorative way.

The Kamakura period from the late Heian, Yamato-e was prevalent by using only the Sumi, black ink which is called Hakubyo. Such as wild animal, people’s life caricature are as a masterpiece, and those works considered as the modern comic.