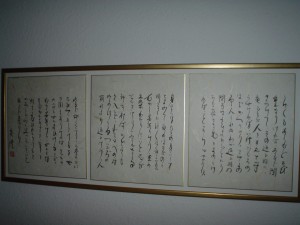 Chinese civilization and the Chinese language has been around 4,500 years ago. Calligraphy had already been developed quite a bit before it came to Japan around the sixth century, at about the same time when the Chinese characters (Kanji) was also imported.

Heian period, which is from 794 to 1185, is known for art and especially poetry and literature. The name Heian means “peace” in Japanese. In Japan, it had already made significant progress in the new art form. The Buddhist monk, Kuukai, together with the courtier Tachibana no Hayanari and Emperor Saga, called Sanpitsu (Three Brushes) they are considered calligraphy masters of the early Heian period (794-1185), and played an important role in the development of calligraphy styles.

The art of Calligraphy and the people of Japan have had a long and close relationship. During the Edo period (1615-1868) and elementary schooling system called “Terakoya” developed to provide the common people with a elementary education. Through this system, the skills developed in writing by means of ink and brush became part of the culture of the general polulace. Through the process of modernization which began with the Meiji Restoration (1868), the custom of writing with ink and brush was gradually replaced by the pencil and pen.

Japanese Calligraphy has its origin in the Calligraphy of China, which dates back some 3000 years. Once this art form from China reached the shores of Japan, it was gradually Japanized.