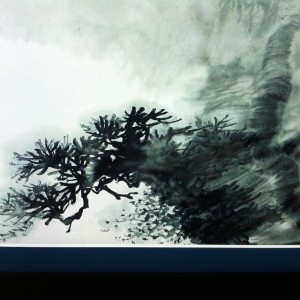 Sumi-e brought to Japan by Zen/priests in the 13th century and is closely connected to the philosophy of Zen/Buddhism. In Zen, truth can be expressed in a single word after hours of meditation, and similarly Sumi-e uses a few, highly expressive brush strokes.

Sumi-e became popular in the Muromachi era together with the rise of Zen, which was introduced from China since Kamakura period.  Sumi-e is developed in China and then introduced to Japan. There is also the reality of landscape work intended for reproduction, but mountain, trees, rocks, river and constituted the landscape elements such as “creation has been landscape” “mental landscape” in many cases. It is believed to be based on Zen Buddhism that express their own spirit within the limited black ink, and it is said to be a factor to develop Sumi-e because there are many Zen priest are Sumi-e artist In China and Japan. 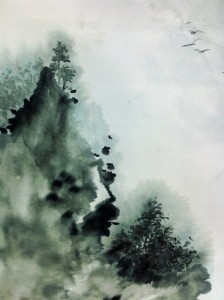 In paintings of this field, the various motifs drawn to painting was rather than looking at the real thing, and was often more of that already taken a copy from another picture. Most skillful painters was polished by carefully replicating the picture.

After the Muromachi period, it became fashionable among Zen monks to display hanging poetry scrolls (shigajiku) bearing Chinese poems, and it also became common to decorate fusuma sliding door panels in Buddhist temples and elsewhere with ink landscape paintings. Sesshu successfully established a distinctly Japanese style of ink painting different from earlier works that had only copied Chinese forms. In the Azuchi-Momoyama and early Edo periods, gorgeous, multicolored kompeki partition paintings were executed, but suibokuga partition paintings were also fashionable, and such talented artists as Hasegawa Tohaku and Tawaraya Sotatsu, using their own unique brush techniques, achieved works of ink painting that expressed the full potential of the medium. 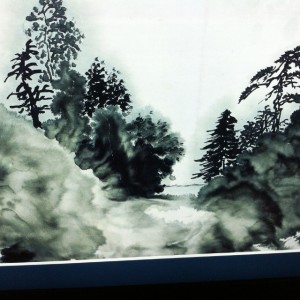 In the Edo period, scholar-gentlemen producers of bunjinga (literati paintings) such as Ike no Taiga, Yosa Buson, and Uragami Gyokudo opened still other vistas, with their free and unfettered ink-painting styles.