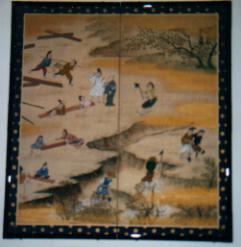 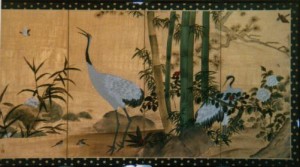 Nihonga is the traditional Japanese painting technique. It usually comparing with the Western oil paintings, which came to Japan in Meiji Era. This is the most impressive characteristic of Japanese style. It uses all natural materials and the process is very time consuming.

There are five characteristics.

Iwaenogu:  Made from mineral pigments being crushed into powder. According to the quality of ores, the tones are changed.f.ex.

Washi:The Japanese traditional paper. The process of papermaking was imported from China in the early 7th century and afterwards it has been developed in its original way.

It is made from hemp, cotton and silk. Especially, hemp is the best material in respect of durability and prevention from moth-eaten, so we can still enjoy the paintings of the Nara period, the 8th century. The fiber of a variety of mulberry trees and the hemp and the other grasses are mixed together with water.