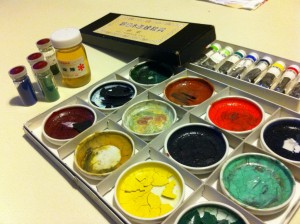 Washi/Silk: Nihonga are typically executed on washi or silk, using brushes. The paintings can be either monochrome or polychrome.

If monochrome, typically sumi made from soot mixed with a glue from fishbone or animal hide is used. If polychrome, the pigment are derived from natural ingredients such as minerals, shells, corals, and even semi-precious stones like malachite, azurite and cinnabar. The raw 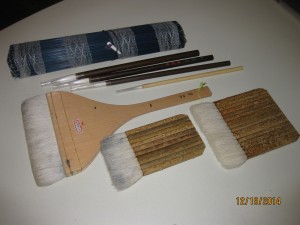 materials are powdered into 16 gradations from fine to sandy grain textures.

Nikawa : A hide glue solution, called Nikawa, is used as a binder for these powdered pigments. Gelatin which was from boiled proteins such as skin and bone of the beast and fish.  In both cases, water is used; hence Nihonga is actually a water-based medium.

Kofun:  (powdered calcium carbonate that is made from cured oyster, clam or scallop shells) is an important material used in Nihonga. Different kinds of Kofun are utilized as a ground, for under-painting, and as a fine white top color.

Iwaenogu: Made from mineral pigments being crushed into powder

Sumi: made from soot 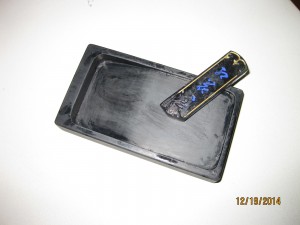 Initially, Nihonga were produced for hanging scrolls (Kakejiku), hand scrolls (Emakimono) or folding screens (Byōbu). However, most are now produced on paper stretched onto wood panels, suitable for framing. Nihonga paintings do not need to be put under glass. They are archival for thousands of years.

Hosho first appeared around the fourteenth century in the Echizen Province of Japan. The best grades are still made primarily from kozo fibers. A fine quality hosho is one of the most beautiful of white papers. It does not shrink, tear, or expand easily, and it is especially good for woodblock and linoleum printing. Because it is not sized, hosho is also good for soft, semiabstract watercolors, but it is not recommended for the beginner.

Kozo is similar to hosho, but it has a tighter arrangement of fibers, which results in slightly less tooth. It also has smaller pores, which means it has less absorbency. Made from 100 percent kozo fibers, it is the most common variety of paper, as well as the largest category of paper. Kozo is slightly thinner than hosho, and more versatile.

Gasen-shi Gasen, which originated in China, is the oldest type of Oriental paper still used for artwork. Both the Chinese and Japanese traditionally prefer this paper for calligraphy and for Chinese-style painting. The name Gasen is derived from ga, which means painting, and sen, which is a location in China. The Japanese added the shi, which means paper, to the name Gasen.

The plant from which the gampi fibers are collected is now rare in Japan, and the plants from other Asian countries are not of the same quality.

Masa paper is the least absorbent of all the papers and the easiest for a Western watercolorist to work with. In overall appearance it greatly resembles torinoko, but today it is made primarily of sulfite pulp, and when it is soaked with water it tends to fall apart.