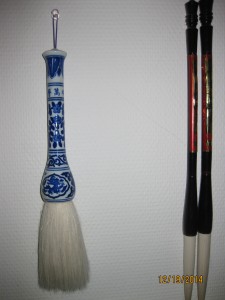 Brushes  have a long history over the past 2300 years. It began in China and then cam to Japan. These brushes were imported with the introduction of Chinese culture to Japan in the Asuka period.

After that KOHO DAISHI (KUKAI) who was sent to China as an envoy in the era of Emperor SAGA, he brought back the manufacture of brushes.

of Calligraphy and Sumi-e , one uses special brushes, 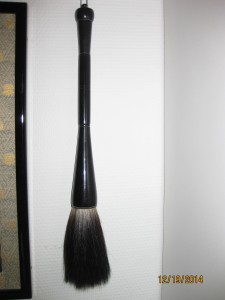 Fude with hair from various kinds of animals, such as, sheep hair, deer, racoon dog, horse, goat, squirrel hair. It is the natural hair that determines the brush softness or hardness.

Black Ink, SUMI is mainly composed of soot from unburned plant oils which is stiffened by a special glue pigment.

SUZURI, which has a hole in one end. There dripped a little water, and by rubbing this against ink-stone with Sumi stick appears the liquid ink. 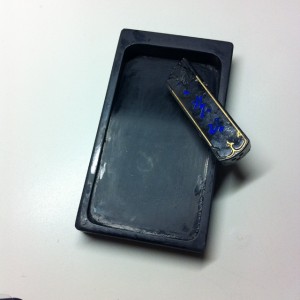 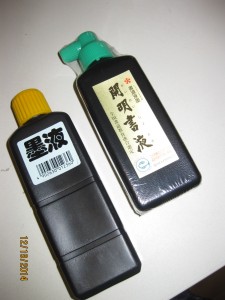 The invention of paper around 2,000 years ago has been very important for Calligraphy development. Today there are many different types of paper of varying thickness, absobency, hardness and color.

Besides brushes, ink and paper, many other tools and materials are used. 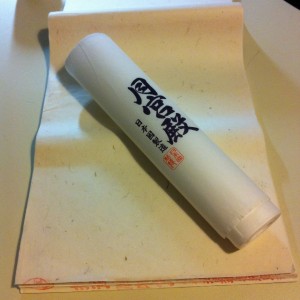 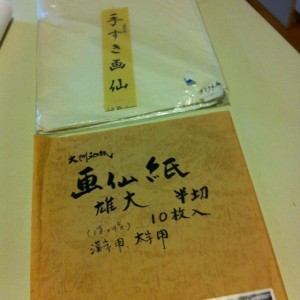 Hosho first appeared around the fourteenth century in the Echizen 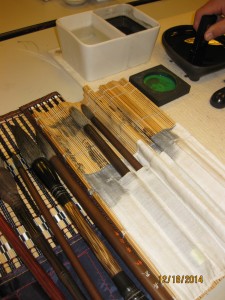 Province of Japan. The best grades are still made primarily from kozo fibers. A fine quality hosho is one of the most beautiful of white papers. It does not shrink, tear, or expand easily, and it is especially good for woodblock and linoleum printing. Because it is not sized, hosho is also good for soft, semiabstract watercolors, but it is not recommended for the beginner.

Kozo is similar to hosho, but it has a tighter arrangement of fibers, which results in slightly less tooth. It also has smaller pores, which means it has less absorbency. Made from 100 percent kozo fibers, it is the most common variety of paper, as well as the largest category of paper. Kozo is slightly thinner than hosho, and more versatile.

Gasen-shi Gasen, which originated in China, is the oldest type of Oriental paper still used for artwork. Both the Chinese and Japanese traditionally prefer this paper for calligraphy and for Chinese-style painting. The name Gasen is derived from ga, which means painting, and sen, which is a location in China. The Japanese added the shi, which means paper, to the name Gasen. 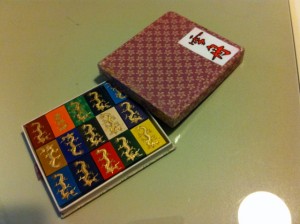 The plant from which the gampi fibers are collected is now rare in Japan, and the plants from other Asian countries are not of the same quality.

Masa paper is the least absorbent of all the papers and the easiest for a Western watercolorist to work with. In overall appearance it greatly resembles torinoko, but today it is made primarily of sulfite pulp, and when it is soaked with water it tends to fall apart.