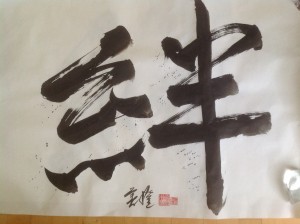 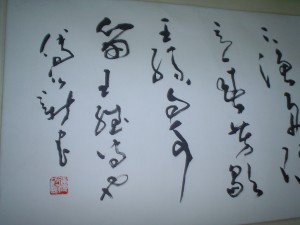 Kaisho literally means “to write correctly.” In other words, this is a style where each brush stroke is made in a conscious and clear manner, to create a form that is very similar to the printed version of the characters, as you can see in a newspaper.

literally means “flowing and artistic” and refers to the semi-cursive style of Japanese calligraphy. Like handwriting in Danish, this is the style that most people would normally use to write with, when they take notes.

Chinese and Japanese are fundamentally different in language structure, and the Japanese had therefore many problems by taking over the Chinese script. Japanese language which does not fit Chinese language f. ex. many different conjugations of verbs and adjectives, and to distinguish between them, they had to develop a phonetic Alphabet to support the imported kanji (Chinese characters). Hiragana contains 46 different syllables. In the Heian period syllabic alphabet was used mainly by women, while men wrote in Chinese.

Beside Hiragana, another phonetic alphabet was developed in the Buddhist temples, namely Katakana. It was used by the monks to take note of pronunciation. In principle Katakana overlap completely with Hiragana, having characters for the same 46 syllables, but at the present in Japanese it is used only to write imported words and foreign names.